Where Did Bed Bugs Originate? 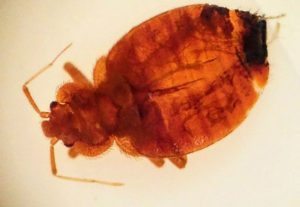 Cimex lectarius has a known origin of 2 million years ago in Saudi Arabia. They are thought to have developed from the bat bug, Cimex pilosellus. Both species rarely interbreed, coexist on the same host, or change their primary host from bats to men or vice versa. During the caveman era, it is thought that bat bugs descended onto neanderthals living in caves. Over time they adapted themselves to feed primarily on humans. To find out more about the bed bug genome click here to view Dr. Booth’s website.

Why Did Bed Bugs Go Away?

These parasites were prolific until we began using DDT on them. This nearly wiped away their existence. Our past practices of spraying residual pyrethroid pesticides within homes kept them at bay until around 2010.

Why Bed Bugs Came Back?

We are now reducing pesticide usage within homes. Our most common structural pest problems with ants and roaches can now be solved with small placements of bait. Gone are the days that we have to maintain a chemical barrier to keep pests at bay. this may have allowed for the sudden resurgence of bed bugs that took place around 2010.

How Many Kinds Of Bed Bugs Are There?

Although commonly called bed mites, they are not mites at all. Bed mites belong to the insect Order Hemiptera. This classification of insects are known as “True Bugs.” Cicadas, stinkbugs, leaf hoppers, and aphids belong to this group too. True Bugs have piercing-sucking mouth parts. The majority of them are adapted to feed on the juices of plants. Few other species are parasitic. One example is the the kissing bug. There are now two species of Cimex in the United States: Cimex lectularius and the southern species, Cimex hemipterus.

Many other endo-parasites are known as vectors. Vectors have the potential to transmit disease organisms to their host. Examples of parasitic vectors are mosquitoes, ticks, and fleas. Bed bugs are not currently proven to transmit disease. Although one Penn State Study says that they can transmit the parasite that causes Chagas Disease. The bodies of bed bugs are filthy. Yet their mouths are very clean. Bed bugs are not considered vectors at this time.

Can Bed Bugs Live On Pets?

Unlike the narrow body of the flea, which is adapted to maneuver the fur-covered bodies of animals, bed bugs are not. Their horizontal bodies are quite the opposite. Their bodies are not adapted to live on the body of animals. In fear of being smashed, which they easily are, they rarely crawl onto their host. Although they will feed on pets, it is not often significant unless your cat or dog is relatively hairless.

How Far Away From The Bed Can They Be Found?

Most bed bugs find harborage within 5 feet of the host’s resting spot (bed, couch, chair). From this distance it can detect the location of its next meal. They are able to detect signals given off by our bodies. This includes such things as body heat, carbon dioxide, and perspiration. Although they remain primarily within this 5 foot radius, they can be located further away in secondary locations. The ability to locate their host changes when located in secondary locations. They can be found anywhere. Other common place is to find them is the main place to sit and view the TV.

Bed bugs have tarsal claws which enable them to climb so well. These tarsal claws are much like a cat’s claw. To their advantage these tarsal claws do not pick up pesticides very well. It is possible that they can walk right over normal formulations of bug spray, once it has dried, with very little effect. There are many different ways pesticides are formulated for professional use. Insecticide can come in suspended concentrates, emulsified concentrates, wettable powders, and micro-encapsulated formulations. It is said that micro-encapsulated products and wettable powders have the best residual effect after it has dried on a surface.

Since so many pesticides are applied ineffectively, they have gained resistance. In Ohio pyrethroid resistant strains are common. Pyrethroids are the main class of pesticide in nearly all bug killers found in stores. Due to this fact it is important to use chemicals only when non-chemical controls fail, or as part of a comprehensive control plan. Bed bug mattress covers, vacuuming, laundering bedding, carpet extraction, heat and flash freezing are examples of natural bed bug control.

Bed mites can survive a long time without eating. This makes it important that bed bug-proof covers, placed on mattresses and boxsprings, remain intact for at least one year. Adults live approximately one year with or without food.

Placing infested belongs outside in the cold temperatures of a Cleveland, OH winter are not always enough to kill bed bugs. In order to kill bed bugs by freezing, temperatures need to remain at 0 degrees F continuously for at least 4 days. Since temperatures fluctuate outdoors during winter, it might take two or more weeks for a bed bug to die under these conditions. Cold is not a recommended control method, although flash freezing with carbon dioxide is becoming popular with professionals. Heat kills bed bugs. Bed bugs cannot survive temperatures above 120 degrees. Steam is produced when water reaches 212 degrees F. Using a steamer is similar to the flash freeze method. It provides near instant death to all life stages, adults, nymphs and eggs. The reported thermal death point is 113 degrees F. Raising the temperature of an entire room to 113 degrees F will kill all life stages of bed bugs after one hour of exposure.

Do Bed Bugs Crawl On You To Feed?

When hunger strikes, they emerge to feed on their resting host. Due to the fact that they have a relatively soft body, they resist crawling onto us to feed. Instead they will keep their hind legs on the surrounding surface. Their front appendages will prop themselves onto our bodies while they take a bite, They will often take a few bites in a row along a vein. It takes approximately 5-10 minutes for them to become fully engorged. After feeding they retreat back into hiding. A bed bug feeds at 5-10 day intervals.

About the Author: Shawn Payne

The Owner of Lakewood Exterminating is Shawn Payne- a formally educated Horticulturist with over two decades experience. Shawn began his career in the Green Industry in Autumn 1998, when he was just 15 years old. He has a Certificate in Horticulture from the Polaris Career Center, where he was named Outstanding Student his senior year.  During Spring of 1999, Polaris Career Center provided Shawn the opportunity to work at Sunset Memorial Park under the care of Wayne Jewell. Wayne trained Shawn in advanced pruning techniques and how to apply pesticides properly. Shawn graduated with a 3.11 GPA in Nursery Management and Landscape Construction and Contracting from the Ohio State Agricultural Technical Institute in 2003. During his time at the Institute; Shawn balanced studying for his dual degrees with tutoring a Student in Entomology (insects), and mentoring the School's Botany class. Shawn also traveled abroad to Myerscough College to study horticulture in the United Kingdom. Since graduation, Shawn has worked for the Davey Resource Group and as a Gardener for the City of Cleveland. He took care of the Cultural Gardens and the Rockefeller Park Greenhouse while working for the City of Cleveland. Shawn was hired in September 2008 to be mainly responsible for the pest control, animal trapping, and weed control at NASA Glenn Research Center. He multi-tasked grounds-keeping duties: Landscaping, heavy equipment operation, snow-removal, lawn mowing, tree removal, pruning, general construction, street repair, water line repair, and much more on site from 2008-2016. During his time at NASA Glenn Research Center Shawn and his former Partner brought their two wonderful daughters into the world. After the birth of their first child, Shawn started his business- Advantage Landscape Services. This was to provide security to his family due to multiple threats of budget cuts at his full-time job. After his former Employer lost the maintenance contract in late 2015- Shawn's Supervisor was let go, and his main duties as the Lab's Pesticide Applicator were outsourced to two separate companies. With a wife, a 2 year old, and 4 year old daughter to provide for: Shawn transformed his part-time landscaping business into a full-time pest control business. Since business has been established, they have gained over 50 reviews on Google- everyone of them 5 stars.