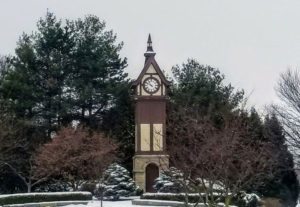 Second in number of pest control requests only to Lakewood itself, Rocky River relies on our exterminating team extensively for its pest control needs. Because it’s on the North coast, Rocky River gets a significant amount of orb-weaving spiders, as well as sporadic invasions from Norway rats. Keep reading to find out about what we uncover most often during our missions in pest control Rocky River, Ohio.

Sewer rats frequently make themselves at home inside residences of Rocky River. While we primarily drag them out of homes in the Beachcliff neighborhood, we’ve also done plenty of rat removal in other areas. The neighborhood surrounding the library and middle school is particularly susceptible to rat infestations. The Morewood Parkway/ Erie Road area has a really high population of rodents also. Rodent control in Rocky River is a combination of trapping, rodenticide application and exclusion. Traps are used inside for rats. Drain covers are installed to stop them from popping out of your pipes. Exterior rodent baiting is used to control them outside, and prevent future infestations.

Controlling Spiders By The Lake

The annual onslaught of spiders easily consumes the exterior of many Rocky River homes. Due to the fact that it’s close to the lake, the Beachcliff neighborhood gets hit the hardest. These spiders devour all of the flying insects that come off Lake Erie. The further inland you travel, the lower the population density of spiders becomes. Our exterminators knock down spider webs off Rocky River homes, and treat the exterior with a long lasting spray.

Every year, mud daubers swarm parts of Rocky River. Peak mud dauber season usually comes between May and June. Mud daubers are wasps that go around gathering mud and spiders. In order to reproduce, they find a spider, paralyze it, and build a mud nest around it. Next, they lay eggs in the nest with the paralyzed spider. As soon as the egg hatches, the larvae feeds on the spider. Although mud daubers can sting, they are not aggressive towards humans. Surprisingly, mud daubers are solitary creatures. Most people assume otherwise because they often appear as if they are swarming homes.

On the other hand, yellowjackets can sting. During late summer people start to notice these stinging insects buzzing around. They nest in the walls of your home, or in old rodent burrows. Sadly enough, the products sold in stores, do not do a great job of controlling these pests. If you find bees and wasps at your Rocky River home, you will likely require an exterminating service. Dust is injected into their nests for fast and effective relief.

Mice Getting Into Homes

Rocky River is home to several housing communities that have construction flaws. Mice compromise these structural defects to gain access to the home. The problem is that every house is built the same. Therefore entire neighborhoods struggle with rodents.

These communities have homeowners associations. They have a landscaper cut and maintain everyone’s yard. Nearly all landscape maintenance contracts require that mulch be applied annually at a depth of 1″-2″. It becomes an issue when mulch is applied to all exterior areas- whether it’s needed or not. As a result, a thick layer of mulch accumulates around the base of everyone’s homes. This thick mulch creates a great habitat for mice and other rodents.

Add to that ample mulch, a handful of people with bird feeders, and you have an absolute mouse haven. Now, in the spring and summer, that’s not a huge issue. Mice have to live somewhere, right? But what happens in autumn and winter, when it’s time to hibernate? All those mice stop at nothing to find a way inside. Unfortunately, a lot of the homes surrounded by this mulch have vinyl siding. At each corner of these homes, you’ll usually find hollow tubes in the siding that the mice use to find their way into attics. Every year, we do thousands of dollars in repairs and remediation each year on homes with these features.

For the most part, Rocky River deals with skunks more than raccoons. Skunks love to burrow underneath decks. They also have a knack for burrowing underneath those weird areas of kitchens that protrude out a few feet from the foundation walls.

By summertime, the neighborhood skunk family becomes quite well-known by their human neighbors — especially to those who have gaps underneath their back deck. We dig out around quite a few decks each year. After digging (and evicting the skunks), we install wildlife barriers to keep skunks and other wildlife out.

Get A Price Quote Emailed To You