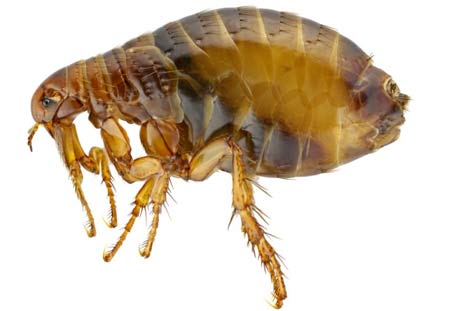 Pet Owners spend over 1 billion dollars a year controlling fleas. This makes fleas an important pest that effects dogs and cats. Fleas are small, narrow bodied, external parasites. They feed off of a host mostly at night or while it rests. Flea bites on humans usually occur near the ankles, with multiple bites lined in a row. There are several species of fleas. In Cleveland, Ohio the cat flea is the only flea to impact our lives. Nearly every dog with fleas in Cleveland has the cat flea.

Fleas are transmitters of disease. They are responsible for transmitting the bubonic plague from rats to humans. Oriental Rat Fleas transmit endemic typhus. The only significant concern in Ohio is the transmission of tapeworms. What happens is: Flea larvae will ingest tapeworm eggs. Then the tapeworm completes its larval form inside of the flea. A pet will ingest an infected flea. The tapeworm will then complete its life cycle within the pet’s stomach. Children can get tapeworms if a flea is ingested.

Fleas become pests when the outside temperatures get hot. July into October is prime time for fleas, although they can live inside year round. It is important to be aware of the flea’s life cycle when performing flea pest control. Spray treatments of insecticide only targets larvae and adult fleas. Flea pupae are extremely resistant to insecticides. Following initial treatment, a second application must be made as fleas hatch from eggs and emerge from their cocoons.

An adult flea will lay 15 to 20 eggs per day under normal circumstances. The flea lays her eggs on the host. Eggs do not stick to hair or anything on the host. They are easily shaken off and dislodged. Eggs fall onto pet bedding and deep into carpets. The eggs fall along with flea dirt. Then they hatch in one week to ten days.

Flea dirt is excess blood eaten and released as fecal matter. These black flakes of dried blood are a necessary food for newly hatched flea larvae. Without flea dirt, eggs that hatch cannot survive. This is one reason it is important to combine cleaning and treating the pet, with pesticide applications.

Flea larvae are very hard to see. Additionally they are fast moving scavengers that feed on dried blood that has fallen off of the host. Unlike their parents, they do not suck blood off of animals. They live in carpets and bedding materials. They avoid light by hiding in cracks and crevices, and feed primarily during the night. Depending on conditions, larval development can take one week to several months. After 3 molts they grow to about a quarter of an inch long and turn purple with blood. After that, they move into cracks and crevices and spin a cocoon to pupate.

Mature flea larvae spin silken cocoons that pet hair and other forms of debris adhere to. After the flea enters the cocoon, it becomes an adult. Metamorphosis is complete within 7-10 days. The flea then remains in the cocoon as a pre-adult. A flea can remain in the cocoon for months. They do not emerge as adults until certain environmental stimuli are present. Some of the stimuli are: The vibrations given off from walking on the floors, carbon dioxide levels, being walked on, and continuous warm humid weather.

The pupae need to sense that there is a host to feed upon before they emerge as adults. This being the case, often people go on vacation and get eaten alive by fleas when they return. This is because all of the eggs hatch, the larvae develop and they all go into pupae just waiting for food. When the occupants of a home infested with fleas return from vacation, a large population of fleas emerge ready to eat.

Fleas overwinter as larvae and pupae. During warm moist winters and springs growth and survival are at its greatest. Newly emerged adults will live for about a week without a blood meal. Once they feed initially, they can survive two months to several years between meals.

Optimal conditions for the flea’s life cycle are 70°F to 85°F with 70% humidity. Fleas are very dependent on humidity for survival, especially the eggs. By reducing humidity within a home, a population of fleas can naturally be reduced. This can be done through the use of dehumidifiers and air conditioning.

Flea control is most successful with an integrated pest management approach. Coordinated efforts to remove the fallen dried blood that larvae feed on, treat the host animal, and treat the indoor and outdoor environment with pesticides provides the best control.

Flea populations are not widespread throughout an area. They congregate in “hot spots.” On the host, fleas congregate around the neck and tail areas, then the stomach. Off of the host inspect anywhere the specks of dried blood defecated by adults fall off of the host. It is essential to do a throughout inspection to find these hot spots. Not only should you focus your efforts on bedding and kennel areas, but you should also focus on:

Do not consider your pets as the only hosts at your home. Alternative host hiding and nesting sites should be included in the inspection. Actions should be taken to treat these areas and remove the animals if possible.

For small infestations, regular vacuuming (every other day), is often sufficient to keep pest populations to a minimum. Vacuuming removes a great deal of larvae and the dried blood that they feed upon. It also opens up the carpet fibers for better pesticide treatments. Use vacuums with a powered brush. Be sure to vacuum underneath objects and along walls where pet hairs accumulate. Dispose of collected material every time you vacuum in a sealed container away from the house. If you use a steam cleaner/ carpet shampooer, flush collected material. Carpet cleaning controls larvae and adults. In order to destroy flea eggs, some people dust carpets with borax in order to dry them out.

There are many options to treat a pet for fleas. Spot-on flea treatments are popular and highly effective. Some are prescribed by veterinarians. Over the counter spot-on products are not as common as they used to be. In 2009 the EPA evaluated spot-on treatments and issued advisories against their use. Keep in mind that spot-on flea treatments can put family members in direct contact with the pesticide.

Flea collars and botanicals provide very little control. Flea dips or flea baths are another option, although less effective than the prescribed spot-on treatments. The concern for flea dips and baths is that the fleas often retreat to inside the ears where they are not effected by the pesticide. They also have oral flea medication that pets ingest. This is usually a insect growth regulator that breaks a part of the fleas development or reproductive cycle. This can be effective if your pets are the only hosts, and all of them take the medicine. This method of control is slower than others yet it can be the safest and most effective long term solution.

Also to note; pests develop resistance to pesticides if the same mode of action is used continuously. It is not recommended to use the same flea medication for extended periods. Pesticides should be rotated frequently. Insect growth regulators are nice to add to the rotation, or to use on a stubborn flea problem that won’t go away.

Treating Indoors And Outside For Fleas

It is necessary to find areas of high flea density in and around the home. After an inspection, and coordinated efforts to treat pets and clean the area, pesticides can be used. Botanical pesticides, like pyrethrins, have a long history of flea control. They have a quick knockdown effect of adult fleas. Although derived from plants, botanical pesticides are not always the least toxic option for use on pets and inside the home. Also many pests, like fleas, have built up a resistance to these pyrethrin pesticides. Insect growth regulators are now the spray treatment many professional pest control companies use to control fleas. Precor is a popular brand of insect growth regulator that controls fleas. It is an aerosol spray that is applied to carpets and pet bedding. Two applications are often necessary spaced approximately 10 days apart.