Wasps and Hornets in Cleveland, Ohio 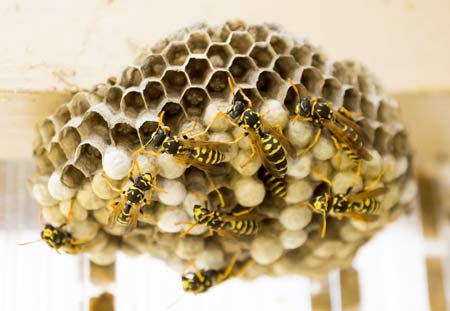 Wasps, hornets, bees and ants are all members of the Hymenoptera order of insects. All have ovipositors to deposit their eggs into sheltered places or into a host. All stinging insects go through a complete metamorphosis. That means they have an egg and larval stage, then pupate into adults.

Many of these insects have modified ovipositors, called stingers. Stingers can be used for defense or to victimize their prey. Some stinging insects paralyze organisms (like spiders) to feed their young.

The word Hymenoptera refers to their membranous wings. The hind wings and fore wings are connected by a series of hooks. Most stinging insects have chewing mouth parts. Others have adapted themselves to drink pollen with siphoning mouth parts.

Many members of the hymenoptera order have a very advanced social structure. They are classified as eusocial insects, and are very unique to the animal world. Only a few other species in the world, like mole-rats and some shrimp, are eusocial.

Eusocial members of the Hymenoptera order all:

One caste consists of the queen and reproductive males and reproductive females (new queens). This caste is dedicated only to their role in reproduction. The queen begins the initial construction of the nest and begins to lay eggs within the cells. The queen provides food for the young until there is enough workers developed to take over for her. Once the colony’s population is sufficient, the queen also turns her nest building responsibilities over to the workers. At that point all the queen does is reproduce.

The worker caste consists of only females who work together to expand the nest and build cells to house the brood. Their responsibility is to care for the brood, and to create a healthy environment for reproduction to take place within the hive.

Solitary stinging insects live, hunt, and care for their young alone. They stay busy building nests for their young and providing food for them. Adults feed mainly on nectar while the larvae are carnivorous. Most species of wasps are solitary. Some solitary wasps live in nests with family members. But they each have their own cell and provide food only for their offspring. They do not adapt a division of labor like social insects do.

The majority of solitary wasps nest underground. Mud daubers and potter wasps construct nests with mud and attach them to places like twigs and walls. Solitary wasps sting their prey and lay and egg on it. Otherwise they paralyse their prey by stinging it, and place it in the cell with an egg. The cell is sealed. Once the egg hatches, the larvae feeds on the prey. More than one victim can be stacked into a single cell as food for the larvae. In most cases the larvae pupate within these cells and emerge as adults. Once the food is provided, parents cease caring for their young.

There are also parasitic wasps. They lay their eggs within a host and the developing larvae feed on the host, basically eating them from the inside out. Parasitic wasps prey on a variety of insects, spiders and even other wasps. Many species are considered beneficial due to the fact that they feed on pests of agricultural and horticultural importance. Parasitic wasps can be used as biological controls to reduce a pest’s population without the use of chemicals.

The fact that stinging insects play such an important role in our surrounding environment; makes it important to contact a professional before applying pesticides. There are instances when the population of these insects must be controlled.