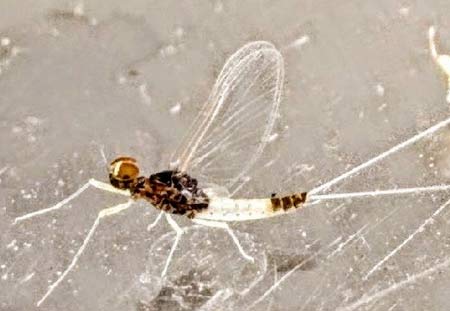 If you live in Cleveland or anywhere else along the shores of western Lake Erie, you may have just been swarmed by hoards of mayflies. These crazy insects come off Lake Erie in late June. Millions of mayflies cover our landscape annually . Winds will even blow the swarms south past the Cleveland Hopkins Airport.

Our area is well known for its mayfly population. Its kind of a big story when Our Doppler Radar picks up a swarm of insects coming out of Lake Erie onto land! This has happened. Dead insect parts fly around in the air causing asthma attacks and allergic reactions in sensitive individuals. Cars can’t gain traction on roads coated with mayfly carcasses. Automobile accidents have resulted due to these slippery road conditions. Cities have to bring vacuum trucks out to sweep the streets to prevent these accidents. Even some towns along the shores of Lake Erie began composting them! While populations vary from year to year, the Greater Cleveland area gets that many mayflies to cause such issues.

The fishermen don’t complain, although a lot of other people do. There isn’t much you can do to control the annual onslaught of mayflies. Turning off your lights that attract them is probably the best way to minimize their accumulations. Mayflies are part of the insect Order, Ephemoptera, who’s name means “one day” in Greek. Do not bother spraying insecticide on them. They are going to die naturally in a few hours anyways. Besides, there are hundreds of thousands of them just beyond your property line. Mayflies are one of the most ancient creatures on Earth, they know how to survive. They have also mastered the art of annoying humans.

After spending a year or two as naiads (what fly fishing bait mimics) in the water, they leave the water as adults. They are the only insect known to molt after they become winged adults. When an insect molts, it sheds its exoskeleton in order to grow.  Young adults will gather on structures to molt, then they swarm.

Swarming is done in late afternoon, early evening. Swarming is when they breed. After reproducing, their life cycle is just about over. Mayflies proceed to lay their eggs. Eggs are laid back in the water, within minutes or a few hours of breeding. After the eggs are laid, the adult stage of the female will end.

Mayflies are sensitive to water quality. As a result, they are a great sign that our water pollution cleanups are a success. Correspondingly, mayflies basically disappeared since the mid 1950’s until the mid 1990’s from Lake Erie. The water was too dirty. So seeing them is a good sign even though they are absolutely everywhere during the end of June!