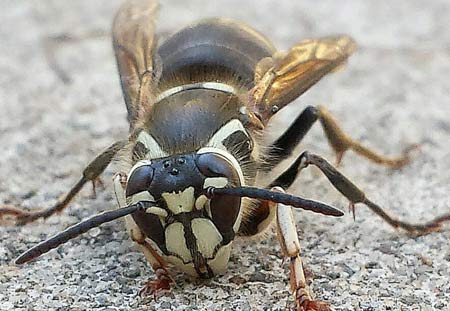 Bald-faced hornets, Dolichovespula maculata, have earned the reputation of being very aggressive and dangerous stinging insects in Northeast Ohio. Yet this is a fair misconception due to the fact that their nests almost always go unnoticed throughout the year. Bald-faced hornets have a unique stinging ability not shared by any other species in their genus. Instead of landing on their target then stinging, they rotate their abdomen downwards, point their stinger at their target, and rocket it into them at full speed. On the other hand, bees sting once and leave their barbed stinger in their victim. Bald-faced hornets (social wasps) can sting multiple times. Their stingers do not detach into their victims. Perhaps this is why bald-faced hornet stings are higher on the pain scale than other forms of insect stings. Conversely this does not make them more likely to sting a person though.

A bald-faced hornet nest is a beautiful work of art, worthy of protection. Like other members of the yellowjacket family, they build paper nests. Cellulose is chewed into a paste, similar to paper mache. When examined closely, the wood fibers are marbled with different colors. This is due to the different kinds of wood that they marble together into a single sheet of paper that are blanketed together around layers of comb.

Their nests can become a pest control issue if the pear shaped, paper nest are in line with human traffic. Most other nests can be left alone. Bald faced hornet nests can be described as basketballs hanging from trees. They can be anywhere from 3 feet to 60 feet high in trees.

Homeowners are often amazed in fall when the leaves fall off the trees. Baldfaced hornet nests are revealed at head level in ornamental trees. The homeowner wonders how they cut the grass all that time without getting stung.

Another misconception is that this stout bodied wasp is a hornet. The only true hornet in North America is an introduced species, the European Hornet. Baldfaced hornets are actually a species of yellowjacket. They are called bald-faced, due to the ivory markings on their head. Other common names include white-faced hornet, bull wasp, and blackjacket.

Bald-faced hornets are beneficial insects. They are fierce predators that prey on other insects. They eat lots of flies, and they even eat a ton of other yellowjackets! Their nests are usually littered with remains of yellowjackets, even staining the fiber of the hive yellow. Their favorite meals are soft bodied insects like bag worms, aphids, and caterpillars. The population of these can be directly related to the amount of bald-faced hornets in the area.

Female workers chew their prey into a pulp. Then it is fed to the larvae. In turn, the female workers eat larval excretions. When the season begins to end, and reproduction wanes, there are a lot less larvae for the workers to tend to. (The average large nest has 300 female workers.) At this time, as with other yellowjackets, their diet switches from proteins to mainly starches. They tend to eat more nectar and such late in the year.

In spring, the fertilized queen emerges from its shelter. It begins the construction of her nest alone. It deposits its eggs into the hive and cares for her young until there are enough workers to take over her responsibilities. The queen can be distinguished from the workers from its lack of hair.

Once the hive grows enough, the queen ceases nest building activities and stops caring for her young. For the remainder of the season, the queen only performs the task of reproduction. The workers forage for food, build the nest, defend the hive and care for the brood. All of the workers are female. The male’s only purpose is for reproduction.

Once Autumn arrives, reproduction begins to cease. The queen produces next year’s queens and reproductive males. These kings and queens leave the nest, and mate together in flight. Afterwords, the male dies and the fertilized queens seek a shelter in which to overwinter. All of the female workers end up freezing to death. The nest is not reused the following year.