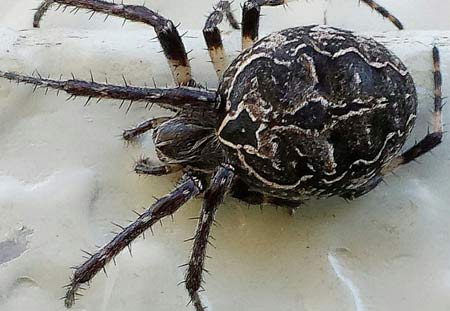 Ohio has a diverse array of spiders. Surprisingly there are over 600 native species in Ohio. They are separated into two main groups. First are the active hunters, like the tarantula. Unlike other species, they do not catch their prey in a web, but actively hunt them. Next are the orb weavers, this is like the spider from Charlotte’s web. As you can imagine they catch prey in their webs passively. These arachnids probably invoke the most fear on people than any other insect. Out of the 600 some species in Ohio, only a hand full could even leave a mark on human skin. Next we will cover the dangerous ones found in Ohio.

There are really only two kinds that are potentially harmful to humans. Most people are familiar with the widows and the recluse spiders. Although very rare in Ohio, they are still around.

Since brown recluse are not cold hardy, they can not survive our Cleveland winters. You will only find them inside, and very close to buildings. In cases where they are found, they were probably brought into the area with another object. Their native range is south and west of Ohio.

As the name reclusive implies, brown recluse are very shy and not aggressive. You will not find them roaming around in the open.

This is the process in which brown recluse spiders bite humans: There is a loose tangled web just outside their hiding place. If the web gets disturbed by humans they can jump out and bite you. Its basically the same method they use to catch their prey. Instead you become the accidental victim.

Lots of people think they have brown recluse but they do not. Consider that in Ohio, you have about a one in 8,000 chance that your spider problem is a brown recluse. Be sure to look for a violin shaped marking on the cephalothorax (front part of the body). Yet do not use that as the only way to identify a brown recluse. There are a lot of spiders around with similar markings.

While most spiders have 8 eyes, brown recluse have 6. Brown recluse are pale brown, to reddish-brown with long widely spread legs. However, they are darker on the front side of the body, and on the legs. If it has long straight hairs or spines, it is not a recluse spider. And brown recluse do not have markings on the abdomen.

Watch out for their bite. This is a neurotoxin that is extremely painful. Additionally it can cause cramping and muscle spasms. While you won’t feel a lot of pain right away with a brown recluse bite, a black widow bite will hurt immediately. Keep in mind their bites are not life threatening to adults with good health.

Northern and Southern Black Widows have various red and white markings on the top of their abdomens. You may be familiar with the characteristic “hourglass” shapes on the underside of their abdomens. Comparably, the Northern Black Widow’s hourglass is distinct, yet broken into two pieces. And the Southern Black Widow’s hourglass is one piece. Since one end is more broad and flattened than the other, it is not a perfect hourglass. The males are smaller and do not bite. They do not have the markings on the underside of the abdomen.

Other Species of Concern

You might not know about the other spiders that can cause injury when bitten. There are grass spiders, bold jumping spiders, yellow sac spiders, and a few other species that are rather intimidating.

Grass spiders are very common in Ohio. They are an active hunter that weaves orb like funnels in grass, weeds and ground cover. Their webs are not sticky. The webs do not trap their prey but disables their ability to escape. When the grass spider senses the presence of food within its web, the fast grass spider runs at it and disables it.

Grass spiders become fairly large by seasons end. They often seek shelter in homes once the weather gets cold in the fall of the year. Grass spiders are shy and extremely fast. Being bit is highly unlikely, however can be quite painful if a bite does occur.

Bold jumping spiders are another larger species of spider than can be encountered around the home. Again this is an active hunter. They are very accurate and precise in their movements. And they can pounce at prey from a great distance. Keep in mind that they are not aggressive towards humans, avoiding contact with us whenever possible. It is extremely difficult to catch these guys. Unlike most spiders, they hunt during the day. This reduces the possibility for accidental interactions with humans.

Yellow sac spiders are a common household pest. They are nocturnal, spending the day in little white sacs. They are very defensive creatures, that will bite if they get caught against your body. The bite resembles the brown recluse spider, but it is not as serious of a bite.

Furrow orb-weavers are a common nuisance pest in Ohio, especially right off the shores of Lake Erie. They are nocturnal. They build their webs in and around our homes. Populations thrive due to the numerous flying insects that come off of the Lake. Here they are provided with a near consistent diet of midges, mayflies, Canadian soldiers and mosquitoes. Furrow orb-weavers nest along windows, roof overhangs, porches, play sets, decks, garages, and especially around light fixtures. They eat anything that gets caught in their web, including other arachnids. They build webs around light fixtures and windows in order to prey upon their primary diet of moths. Furrow orb-weavers also build webs to target ant swarms that appear 2-3 days after a rain.

This is the only orb weaver to overwinter in Ohio. Making them one of the first spiders noticed in spring. Once the spring rains come, the ants begin to swarm, in turn the population of furrow orb-weavers quickly explode. They are not harmful to humans, and are considered beneficial due to the fact that they feed on other pests. Furrow orb-weavers are profuse, persistent, and can cause problems around the home.