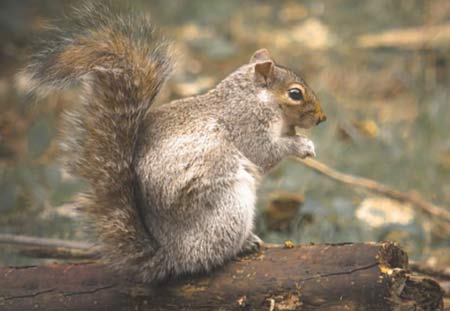 It is said that at one time a squirrel could travel across the state of Ohio from tree to tree without touching the ground. Although this feet might not be possible now, we still have an abundance of squirrels in Ohio. Most of our squirrels are grey squirrel species.

In Cleveland, Ohio and other notable areas, like Kent, Orange, and Wooster, Ohio there is a large presence of black squirrels. Black squirrels are a variety of the grey squirrel.

The truth is that before Europeans settled in America, black squirrels were the majority. Their black pigmentation, which is a mutated gene, helped them camouflage themselves into the deep, old growth forests that once existed in America. Nowadays this habitat is pretty non-existant. Black squirrels dominate in the northern regions, where their black fur hold in more heat that the lighter grey varieties of squirrel.

The native grey squirrel is the most dominant species in America. It is prolific and adaptable. The species has even spread to Europe where they are considered an invasive species. Grey squirrels make nests in tree crotches with dry leaves and twigs. They also nest inside attics and wall voids. Grey squirrels are most active early in the morning and at twilight. They are less active during the heat of the day.

Grey squirrels have a lot of interesting qualities about them. They are one of the only mammals capable of descending down trees face first. They store their food in multiple small caches. In one year, one grey squirrel can hide food in over 1000 locations. Obviously, grey squirrels have excellent memory.

Grey squirrels can even be deceptive. If they feel like they are being watched, they will go through the process of making a cache, but they seal it up with the food still in their mouth. Not many people see animals as living, thinking organisms. Grey squirrels prove that animals think.

Red squirrels mainly feed on seeds of conifers. They do not bury their food in caches but store conifer seeds in piles in hollow wood. Storage piles can be up to 30 feet wide and 1.5 feet high!

Flying squirrels are nocturnal. Unlike other squirrels, they are omnivores, they hunt insects and even other rodents. They have been known to fall down chimneys if not properly screened.

Fox squirrels are Ohio’s largest squirrel. They are not native to the region but moved into the territory when deforestation became prominent. They do not like thick wooded lots. Fox squirrels spend more time on the ground than any of our other squirrels. They are found primarily in western Ohio where small agricultural lots break up forested land. They are found in older suburbs with tall shade trees and little undergrowth.

How To Get Rid Of Squirrels In Your Attic

In order to get rid of squirrels inside your attic, you must first identify the problem as squirrels. Squirrels are heard scurrying through your walls in the morning. At night they are heard gnawing wood to get further inside. Their baseball sized entry holes are found primarily in soffit returns and behind gutters. Paper towels may be stuffed in potential entry points in order to evaluate which holes are currently being used. Anything larger than a 4″ squared hole are not used by squirrels. This is due to the fact that a raccoon can enter this sized hole. And raccoons, of course, are predators to juvenile squirrels.

Get A Price Quote Emailed To You

Squirrels make a variety of sounds:

It is the scampering of their feet on the attic floor that most people hear. Most Lakewood, OH homes have walk up attics. Newer homes don’t usually have an attic floor. This is due to the fact that 2″ x 6″ lumber for joists has been exchanged for 2″ x 4″ lumber. Most newer homes in Rocky River and Westlake, Ohio have 2″ x 4″ construction. What a lot of the newer homes do have though are overhangs for soffit ventilation. Squirrels make noise in the soffits at the time when most people are getting ready in the mornings. It can sound like something is in your walls because the soffits sit lower than the ceiling.

Just because you hear noises in the walls or ceiling does not mean that you have a squirrel in your house. It could just be a tree branch rubbing against the home in the wind. It can also just be a mouse. Never under estimate the sound that a mouse can make through drywall. Their nighttime gnawing on your wall studs makes it seem like something much larger is on the other side. Most calls we receive for nighttime noises in walls end up being mice. Other wildlife noises coming from the attic at night could be bats, raccoons, or flying squirrels. Tree squirrels will be most active in the morning. If you hear noises just after sunrise coming from your attic, you most likely have a tree squirrel infestation.

Main Dangers Of A Squirrel Infestation

How Many Squirrels Can I Expect To Catch?

Squirrel nests inside homes are rare during the summer due to excessive high heat in attics. Depending on the time of year, their may only be one female nesting inside of your home. On average there are 5-6 squirrels nesting inside during the winter months.